World famous, Venice, LA, is located 77 miles south of New Orleans on the west bank of the Mississippi River.  Venice has a wide variety of trophy fish for the eager angler, and is considered the launching site for many Offshore Fishing Charters in our great state of Louisiana.  Venice is in the top three biggest seafood ports in the United States by weight.  It’s only rival would be nearby Grand Isle, LA.

Though Venice is a year round fishing destination, you will find that January through March is prime time for trophy tuna and wahoo in Venice.  Venice LA simply has some of the best fishing in Louisiana. In addition, Venice was recently voted one of the Best Destinations for Fishing Charters in the US and for good reason.  Your chances of landing that 200lb+ yellowfin tuna, and wahoo weighing more than 100lbs, increase in the earlier spring months.  Determining what you want to target in species, will determine your best time of the year to go.

Recently, an angler fishing out of  Venice, LA has shattered the states record for the largest blackfin tuna, at a whopping 41 lbs, caught as of January 2017.  Many other records have been set and will continue to be set out of Venice, you can bet on that.

You will experience the thrill of catching trophy Tuna to Blue Marlin, and many other species in between, while fishing the beautiful blue waters of Venice. 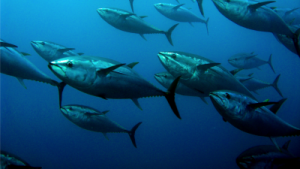 ear round. If you fish around the the many oil rigs and the world famous “Midnight Lump”,  you are sure to land large yellowfin, blackfin, and bluefin tuna.  The “Midnight Lump” is a salt dome that rises up from the ocean floor to within 200ft of the waters surface, providing a refuge for large schools of game fish. 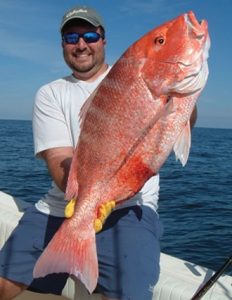 Fishing near the oil rigs, and sunken debris, that is everywhere off the Louisiana Coast, you will be able to hook on to the bright-red fish, we refer to as “Red Snapper”.  As they are a reef dwelling fish, bottom fishing in less than a few hundred feet of water is the trick to fill your ice chest. You may also hook on to some mangrove snapper, cobia and grouper on these types of trips.

If you’ve never caught a wahoo before, you will be in for a treat. These fish travel alone and put up quite the fight.  A white, flakey fish, that is mouthwatering! The wahoo will be found mostly near the oil rig platforms, and they are difficult to catch. If you are fishing with an experienced Charter Boat Captain, you will have your best luck at this delicacy.

Billfish refer to the great sport fish such as the white marlin, blue marlin, sailfish and swordfish.  The blue marlin is the most coveted for anglers and can reach lengths of over 100 inches and weigh well over 1,000 lbs.  You will be fishing the deep waters out of Venice, LA to chase these trophy fish. 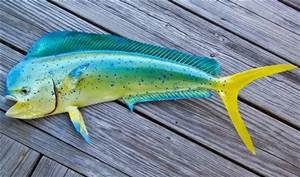 Often referred to as dolphin, not the “Flipper” type, are the perfect fish for the experienced and the not so experienced deep sea angler. These fish put up a great fight, are found in large schools, and attracted to many types of bait.  It is always fun and usually very rewarding when fishing for Mahi-Mahi.

How’s The Fishing Since The BP Spill?

The Deepwater Horizon spill, also referred to as the BP oil spill, that began April 20, 2010 did impact the fishing in our Gulf of Mexico.  Eleven people were lost and never found in the explosion that rocked our Gulf.  The spill is considered the largest accidental marine oil spill in the history of the petroleum industry. Many conservationists, local and federal government agencies, as well as BP, reacted quickly and effectively in bringing our estuaries, such as those found out of Venice, LA,  back to the great fishing locations they are famous for.

How To Get The Best Experience

The unseasoned to the seasoned angler will tell you, the best way to experience everything a day of fishing in Venice, LA has to offer is to hire a Charter Fishing Guide.  They know when and where to fish, they types of bait the specific species are hitting on and how to set your tackle.

There are many fishing camps, hotels and fishing lodges in the Venice area.  Most of which cater to the visiting fisherman who has scheduled a Charter trip out of Venice.  We have found that Kingfish Lodges have affordable prices, very nice accommodations and all of the connections you need for the perfect fishing trip,